I just finished thinking about thought capture and how to make it happen. In this post, I’ve downloaded a quick list of the tools I use to accomplish thought capture:

Simplenote is my top choice for capturing thoughts that I know could turn into blog posts, articles, or anything written. As I’ve written about in the past, I really enjoy the simplicity of writing in naked, glorious Helvetica in Notational Velocity.

While I can’t have Notational Velocity in front of me unless I’m sitting at my Mac, I can have Simplenote everywhere. By everywhere, I mean my iPad, iPod Touch, and most recently, my Droid using SolidNote.

Sometimes thought capture isn’t always about catching new thoughts. Sometimes it’s just about polishing existing thoughts and ideas. That’s where Simplenote really shines. Your text-based ideas are always at your finger tips, always editable and ready to be added to.

Evernote is an extremely powerful thought dumping bin. It’s designed to catch just about any manifestation of human thought we know of – images, text, HTML, files of all types, audio files, and more. It seems to be getting more powerful and extensible every day with new features like the trunk.

Evernote scores high on ubiquity. It works on ever major operating system out there: Windows, Macs, and Ubuntu. Evernote apps are also available for just about every mobile device in existence. Even if you don’t want to install an app on your computer or phone, you can check out your notes at evernote.com.

So no matter what device you tap and bang on all day, Evernote can be there.

People in the various GTD haunts around the web seem to either love or hate Evernote. It probably comes from an “all or nothing” attitude based on the idea that you need one and only one capture tool.

I’ve seen this side of GTD land, and it ain’t pretty. It’s littered with the carcasses of lost ideas and clouded by the dark hue of misdirected energy. Please don’t impose rules on yourself. Life has enough real rules.

I’ve come to the conclusion that the number of tools you have doesn’t matter as long as you’re more productive because of them. Simple as that.

I use Evernote – but just enough. Yeah, it’s pretty cool that you can set the latitude and longitude of notes, but it doesn’t help me get things done, so I don’t care.

In the beginning, I had this stupidly crazy tagging and notebook system. After I while, I realized it was causing more angst than ease in my information workflows.

Fortunately, I’ve broken the green elephant and put it in its place in MY workflow. It’s my “everything else box” (EEB).

I’ve decided I only need two notebooks: one called inbox and one called archive. I think of these as a thought net and a dust-free filing cabinet, respectively.

If I have an idea, find some snippet of info online that I may want to use or turn into something, it goes into my inbox, the thought net.

At least once a week, I pick through that net and zero it out. If I want to use the idea in my writing, it likely lands in Notational Velocity (Simplenote). Other bits go to my archive folder – sometimes with a tag, sometimes without. Who cares. No rules.

And some of the stuff just gets deleted because it’s pure crap, frankly. I don’t save things unless there is some chance it’ll come in handy later.

I like using Evernote as an EEB because I impose absolutely no rules on what can go in there. It’s a thought latrine, and it works well in that role.

I’m stricter about what I put in Simplenote because I think of it as being a place solely for my own content. Why? I’m not sure. I just do. 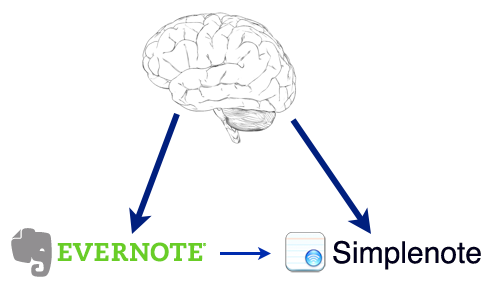 Cringe, wince. Yes, I still use email, on occasion to capture stuff. The most common items are random files that I encounter when I’m on some computer other than my Mac. I don’t like sending files into Evernote because it’s too hard to get them out.

Typically, I’ll send the file as an attachment to Gmail, then star it. I use Gmail stars for marking action-based email.

When I’m back at my Mac, I will do what I need to do with the file. Then I unstar it, and flick that puppy into my Gmail archive.

I should talk more about stars later. I love them, but again, just enough.

Sometimes you just need to go old school. Maybe your phone’s dead. Maybe you don’t want to figure out how to multi-task between your note app and phone. Or maybe you’re just feeling a little 19th century.

Let the moment dictate it. If pen and paper are the only obvious choice, by all means use them. No rules here either. Put the note in your pocket, and do something with it at the end of the day.

Bottom line: get that thought DOWN.

Sometimes a naked thought is actionable and doesn’t need any extra clothing. Whenever possible, you should get these onto some kind of to do list immediately. I use Remember the Milk because I can access it almost anywhere:

I can add tasks through any of these same interfaces or even use email.

So if I have thoughts of the format “I should check out somewebsite.com” or “start writing the 21st century great American novel,” they go straight into RTM.

I have so much to say on RTM, I don’t know where to start, but I should and soon. It’s awesome.

Use your head, man

Experimentation is a wonderful thing, but it can also get you in trouble.

Pain medication is made to help people. It’s like crack cocaine for others. Look for signals that you’re spending more time ogling your hammer than hitting nails with it.

Now go abuse your tools and see what they can take. Seriously, get out of here. Go.