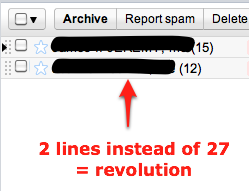 Update: After using Priority Inbox for a few weeks, I've discovered that it didn't really add a lot of value to my email workflow. If it helps yours, great. I'm leaving this post up to show what was on my mind when Priority Inbox first debuted.

In my opinion, Google revolutionized email by bundling conversations in Gmail, and it looks like Google may be about the write the next chapter in email management with priority inbox.

I have been using a system that represents about 50% of the total solution priority inbox looks to provide.

The goal of my system is inbox zero, and my mobile devices are on the front lines in the battle to protect my inbox.

I triage probably 80% of my email with my phone and iPad. When I have a chance to check email, I rarely spend much time on the checking part.

Rather than trying to read everything, I scan. Then I star and archive anything that may need a closer look. Everything else either goes directly into archive or gets deleted on the spot.

When I get back to a full web browser, I open gmail, and all of my starred messages are sitting in a secondary inbox below my main inbox. This extra inbox is made possible by "multiple inboxes," a feature you can activate by going to Settings > Labs. 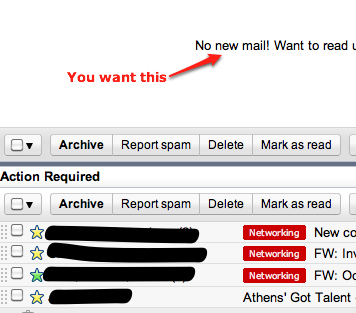 I have my secondary inbox dedicated to showing starred archived email using the query "is:starred".

This segregates “action required” email from unprocessed email in my inbox.

I’ve been using this system for over a year now with very little modification. It just works really well for me.

Priority inbox looks like it may supplant the need for multiple inboxes, which is fine by me.

That gray area between spam and stuff I want

Sorry if that heading made you throw up a little but, but I promise I'm not talking about food. Thank God.

I’m actually talking about the most promising feature in priority inbox: the ability for Gmail to let the cream of your messages rise to the top.

There are so many, many, many emails that I get weekly that aren’t really spam but are very low priority. Examples include store discounts/coupons, newsletters, and account statement alerts. I archive or delete most of these on the spot, but I can envision a more efficient system where these all go into a low priority pile and get reviewed on a less fequent basis.

Priority inbox will supposedly "learn" which emails are most important to you and put those at the top of your inbox. Lower priority emails will fall to the bottom.

Time will tell how well priority inbox works and whether it can be trusted, but the concept is very appealing. I think it makes sense for Google to continue to refine something they already do really well: email.

I find it interesting that Google announced priority inbox right on the heels of announcing Google Wave's certain death.  Fact: Google Wave was never going to replace email. Email is just too rooted in the workflow psyches of the First World.

But email can get better through refinements and user-specific extensions. I think that’s what we’re seeing happen now. Email isn't going away; it's going to get smarter.

Are you using priority inbox already? What do you think about it?