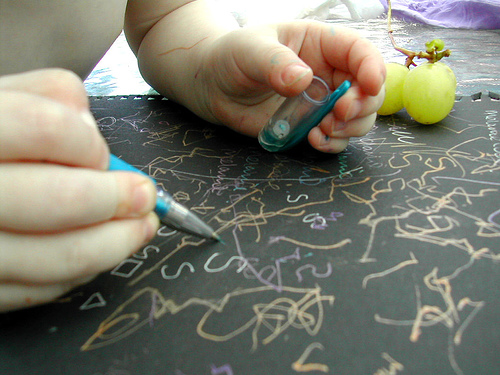 [Photo by wiccked via Flicker]

In the waning years of the 20th century, a marked change occurred. Everyone became a composer. It happened almost at once.

In the many centuries before email arrived and trumped the sun as the true center of earth’s orbit, people were trained on the art of writing hand-written letters.

Few, if any, people have ever been educated on the art of writing email. The overnight adoption of email allowed little time for education.

If you were to hand a pen to an adult that was never taught basic writing skills, the end result would probably not look that different than the scribblings of a young child. And if their peers were all the same, none of them would know how poorly the tool was being used.

And that’s why email is what it is today: a highly accepted but primitively used, unevolved craft.

The war on email

Broadly speaking, there are three fronts in the war on email:

Front 2 has also gotten a lot more attention recently. Email has made us primal wrecks. I’ve noted email’s ability to make us wet our pants. Randy Murray sagely tells us to keep it in our pants. MacSparky even spotted an email monkey not long ago.

Fronts 1 and 2 have something in common. They're reactive, inbox-oriented strategies. Front 3 deals with your outbox. It's about proactively increasingly the quality of what you send, before you send it.

“Evolving email” will be a series of brief posts on making email better before clicking the send button. Each post will focus on some aspect of the art of composing email, often with examples. I use the word "art" because writing email is not scientific. It's subjective, varies greatly by context, and should ideally reflect the awareness of a compassionate human mind.

That's not to say that email should be an elegant art form, and I'm not out to save the planet one email at a time. Rather, this is a utilitarian pursuit of self-interest. The primary goal is to get more value out of the time we spend pounding out letters between subject lines and signatures.

Some of the tips will be pretty mundane, so don’t get too excited. But they will all be aimed at correcting problems that I see every day—problems that should be going away but simply aren't.

In general, most tips will be based on the same way of thinking: put yourself in the inbox of the recipient. It may sound simple, but in practice I find that it rarely occurs; when it does, the effects can be quite profound.

This series will begin its evolution next week.