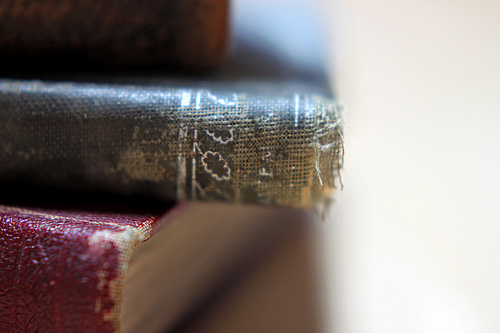 [Photo by dklimke via Flicker]

In the year 2010, there are two large public silos of text-based knowledge. One’s been around a while; the other just showed up: libraries and the internet.

Libraries are incredible for what resides within their brick and mortar: documentation of virtually every written human thought since thoughts were recorded on paper.

The internet is pretty damn awesome, too. In a remarkably short period of time, it’s become a nearly real-time information engine that attracts and amalgamates an inconceivable amount of data.

Libraries and the internet serve different needs in the year 2010. The internet is a natural resource for real-time information and communication (current events, email, social media), while historical, story-based information resides in library books.

What if these two monumental institutions of mankind could mate? How would it happen, and who would make the first move? Should books get in bed with the web, or should the web jump books? Is it really that important?

Yes. And I hope to convince you why.

The internet is an handsome engineering achievement. It’s a sophisticated mash-up of computers, wires, and software that form an artificial neurological structure for the world.

Google perhaps ushered in the Web 2.0 era by being one of the first to profit from the power of human filtering. Google search technologies like PageRank figure out the most likely answer to your query by directing you to sites containing content that others linked to.

Google works well. So well that it obliterated its early competition by using human filtering to shrink the vast multi-billion-page web to a single page of relevant search results. And today in 2010, that first page is the “internet” for many.

But there’s only so much you can put on one page. And while Google’s black box wizardry is damn good at figuring out what should show up 0.07 seconds after you hit enter, Google’s index is still limited to what’s been added to the web since the 1990s.

Granted, that’s all kinds of bits and bytes. But fifteen years or so just isn’t enough time to catalog and curate every single tidbit of human knowledge that’s been recorded since people started writing things down. Even the most Google-favored one-stops like Wikipedia have only been curated by for the last ten years or so.

The web is indeed a sexy rockstar. A lustful, live for the moment, chew it up, spit it out, hedonistic organism of information.

But the web is still a child.

Let me tell you a story about books

Don’t get me wrong. I’m a Wikipedia nut. It’s great. But it has a shortcoming that isn’t made up anywhere else online. Wikipedia entries usually don’t tell a story.

Storytelling, it seems, is the vector of human meaning, if not its essence. To be human is to be something of an autobiographical creature: the owner of a narrated existence that is comprised of experiences. Experiences and memories are the neurological currency of life, and they are accumulated, transacted and communicated in narratives.

Before the web, people learned everything through stories. Both verbal and written. The best written stories are encased in books, the most time-tested medium for communicating narratives when mouths and ears aren’t in the same place. More importantly, books reach across the strata of time.

Within all those stories in all those books are countless tales of humanity. Tales of folly and fortune, triumph and misery. Of evil and love. Accounts of the rise and fall of people and societies. Like broken records, books debunk the “this time is different” mentality over and over and over again.

Virtually every point along the pendulum’s multi-dimensional swing has been written down in books.

But above all, books contain answers. Enshrined in books are solutions to the mistakes that a memoryless humanity will repeat ad infinitum.

Civilizations progress when they take more steps forward than back; books are the medium through which non-overlapping generations hold hands along this journey. They are the stepping stones laid by humanity past for humanity present. Books help ensure that we efficiently pursue our ultimate destiny: getting better than before.

Books are being rapidly reinvented as you read this. The concept of an e-book is new. Like brand spanking, wobbly legs new. While Kindle has been out since 2007, e-reading is just now beginning its ascent.

Recent sales figures show that 2010 e-book sales have nearly tripled over 2009. Something seen as an impractical gimmick by most people a few years ago is now something that every publisher and distributor of books wants to cash in on.

E-books often have page numbers and chapters. Even the displays emulate page turning through graphical effects.

E-books are similar to their battery-less forefathers in another striking way. A very frustrating way. Sharing content in a e-book is no easier than trying to copy and paste ink in a paperback.

When books were only made of paper, I never questioned the fact that I had to manually type paragraphs I wanted share. But now this seems primitive and maddeningly absurd.

Now that my reading apps sit beside all of my other social apps, I can’t help but ask: Why can’t they talk to each other?

Reading a book through the glass of my iPad in 2010 is like staring at the face of a neanderthal frozen in ice. What if I could thaw him and let him speak?

Web 2.0 is largely about connecting people and answers – as long as those answers are on the web. What if I need an answer that’s in a book?

Today, I can go to my library’s web site and search for titles. Or I can do a Google Books search. Or I can read reviews at Amazon.com. But all those things have something in common. I’m required to first make a decision to look for information with books in mind.

What if my question was answered on page 207 of a book written hundreds of years ago, but I have no prior knowledge of that?

As I said earlier, people can only enter so much into Google’s index in fifteen years or so. No matter how determined academics, zealous wiki curators, and bloggers may be, they’re a minuscule subset of the web user base. Their numbers are dwarfed by the billions of ordinary people reading books across the world right now.

What if the natural human instinct to share and relate stories could be harnessed so that the masses could curate e-books?

What if reading was sharing?

When I’m reading a book in the Kindle app on my iPad and I come across a paragraph that really speaks to me, I highlight it. Sometimes I make a note too.

I suspect thousands and thousands of other people do the same thing on their Kindle device.

Just imagine if all of this information were made available to search engines, and imagine if other people were allowed to comment and create conversation around e-book annotations. Over time, readers would excavate all of the fossilized information now frozen in books.

At the same time, the conversations that would evolve around parts of books would give them modern context. The dialog would make parts of books relevant to search queries. Then, search engines like Google would be able to link a question asked in 2010 to an answer provided in 1750.

The most timeless topics would remain near the top of Google search results because conversations around these topics would never end.

It’s conceivable that the web may one day catalog the fruits of every great written human thought to date. More importantly, web search technology would connect people with relevant answers from the past.

It’s possible that parts of books would become more important than the books themselves. And perhaps people would be less likely to read whole books once book knowledge is brought online.

The web may even ultimately do to book publishers what music sharing did to record labels. But if people read more, know more, and leverage more is that not a worthwhile gain?

Web 3.0, getting ahead of ourselves?

Web 3.0 is supposed to be all about semantics. The semantic web will supposedly run on machines that can think more like people. In other words, computers will do more human-like filtering for us. Conrad Wolfram, Strategic and International Director Wolfram Research, goes further:

I suppose with Web 2.0, a lot of people talk about how the human users generate the content. I think we’re now getting to an era where that real-time content generation can not only be directly from humans, but from where the computer is producing new results in real time, responding to a question.

That sounds like a fascinating future. But here’s the thing… we’re a long way from being done with Web 2.x. And if computers are to do more thinking for us, we better make sure they’re informed.

Back to that destiny thing (getting better than before)

The web is indeed an emergent entity. It’s irreducible to its constituent parts. But like its most important parts, human brains, it’s given to impulse and emotion. The memory of a web-based society can be short. And we know that a meme-driven, memoryless society is a society easily influenced and manipulated.

The art of propaganda lies in understanding the emotional ideas of the great masses and finding, through a psychologically correct form, the way to the attention and thence to the heart of the broad masses.

The receptivity of the great masses is very limited, their intelligence is small, but their power of forgetting is enormous.

If we want to continue that march to betterment, it’s critical that we know where we’ve already been… and perhaps more importantly, where we never want to go again.

The instructions already exist. Let’s make it easier to find them.