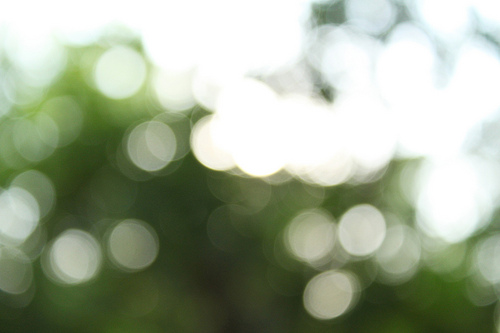 [Photo by spongemonkey via Flicker]

I’m lucky I was born in the 20th century. Not only did that century bring us goodies like anesthesia and air conditioning, corrective eye lenses became widely available and mainstream. Given that I’ve been nearsighted since I was eight years old, my timing was good. Real good.

So many other people are just like me. And most of us never think about it. Nearsightedness is a forgettable handicap. It simply doesn’t matter anymore – not for survival, not even for cosmetic purposes.

But had I been born just one or two hundred years ago, my poor eye sight would have meant that I could only contribute to society by seeing things up close. Mine would have been a life of pebbles, not mountainsides; faces, not crowds; leaves, not gardens.

Like or not, for most of human existence, the quality of your eyesight defined who you were.

Statistics suggest that the incidence of myopia is increasing. Some think that the proliferation of electronic screens (computers, smartphones, gaming devices, etc.) is contributing to the problem, but there’s no conclusive evidence.

So why the hell am I still talking about it? It doesn’t matter, right?

Well sorta. Eyesight is in good shape. Vision, on the other hand, is still under siege. We face an even more insidious myopia today.

It’s so easy to bottom feed in the weeds of an e-world where every fleeting whim of man and machine has the power to divert your attention any time of day. Wherever you are, you have a standing invitation to surrender and submit to an all-you-can-eat, sugary buffet of electronic minutiae.

But surrender is only one option. There are no laws that say we must accept the default of leaving all of our antennas on all the time. I’m not joking. It’s true.

You don’t have to accept that, out of the box, your phone orgasms in your pocket every time you get Viagra spam.

What if antennas were only left on for a purpose? What if social networks and email habits were based on strategies with goals in mind? What if it weren’t all mindless?

In a perfectly rational world, I believe that every possible action and endeavor would have to pass a simple smell test: Will I be happier if I do it?

Speaking of doing it…

Harvard psychologists recently used an iPhone app to measure people’s happiness at random times of the day. The happiest people were those having sex (though the quality is questionable if they stopped to respond to their iPhone in the middle of it).

Whatever people were doing, whether it was having sex or reading or shopping, they tended to be happier if they focused on the activity instead of thinking about something else. In fact, whether and where their minds wandered was a better predictor of happiness than what they were doing.

For the 99.5 percent of people not doing the horizontal polka, “there was no correlation between the joy of the activity and the pleasantness of their thoughts.”

Sex or no sex, the common denominator was focus. As one of the psychologists observed,

We can debate which head he’s referring to, but this is a notable observation nonetheless. Focusing on things, particularly things with purpose, is a winning strategy. Being scattered and directionless, not so much.

If you’ve read this far, it’s likely that you have some appreciation for focus. Or maybe seeing sex in the last heading kept you around. In any event, I’ve still got you. So I want you to think about something.

Consider the incredible opportunity before you. You understand the value of focus in a time when your myopic peers are essentially being propped up by empty calories – incessant stimuli that do nothing to create lasting memories, wealth, or happiness.

Just like those with good eyesight historically had a natural competitive advantage over their wall-smacking counterparts, you can get ahead today by not always viewing your world up close.

Time and attention are very valuable resources right now, and they will be very scarce this century for most people because most people won’t question their myopic, sugary diet.

If there’s one message I want to get across, it’s that you should not bemoan this new era of constant interruptions. You can’t change where the knowledge economy is taking us. But you can benefit from it by differentiating yourself as a highly focused individual.

The next time you’re standing at a busy street corner waiting for the signal to cross, don’t check your phone. Look around instead. Look at the patterns you see that others, with their heads down, don’t.

Look at the sky, the clouds, the world. Look down the road. That stuff is YOURS. Pick the fruit that no one else can see.