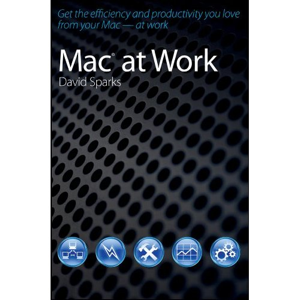 In the past, if you wanted to use your Mac to get things done on the job, you had to go it alone. Windows-minded IT staffs were of little help. The mission of the Mac pariah was to cobble together tips and tricks by doing countless web searches, reading blog posts, and taking trial and error approaches.

You can still be a fearless trailblazer of course, but now you also have the option of walking in the footsteps of a Mac productivity giant, David Sparks.

In his highly practical, easy-to-read book, Mac at Work, David touches on every aspect of using your Mac on the job. You’ll see things like:

Not only does David demonstrate his command of the many tools he presents, he provides practical use cases. He even tells you how much each application and service costs.

As I read Mac at Work myself, I was struck by how David covers so many topics without overwhelming the reader. Each topic is thorough yet concise. The book is also well illustrated with screen shots. David provides the optimal amount of information needed to inform a decision in plain English, not arcane geek speak.

How to get your copy of Mac at Work

Mac at Work is available for Kindle now. The softcover release date is January 17, 2011, but you can pre-order now at Amazon. Mac at Work will also available in in the iBookstore at a later date.

As a special treat for PE readers, David was kind of enough to stop by on his virtual book tour and let me ask him a few questions. Here’s what he had to say.

What motivated you to write Mac at Work?

Being a Mac using attorney in an industry overrun by Windows PCs, I truly am a pilgrim in an unholy land. I got tired of the “Macs are toys” crowd. I could have just kicked the dog but instead decided to write a book. That is how I roll.

Who is the target audience for the book?

Anybody who wants to get ahead with their Mac. There are some really great software developers, workflows, and products out there to let Mac users get their work done with panache. The book leads the way.

How in the world did you manage to write a book while balancing a professional career, the Mac Power Users podcast, your blog, time with family, and other pursuits?

I was really lucky and had tons of help. My family gave me time on weekends to write. Katie Floyd helped pick up the slack at the Mac Power Users. Basically, everyone I know pitched in where they could. Also, I felt like I was on a mission. There is no other book like this and I had to get it out of my system.

What was the biggest challenge you had to overcome to get Mac at Work from idea to print?

Persistence. I was told several times how Mac owners don’t care about “working” with their Macs and the book would never work. I just stuck with it until they decided it would be easier to just let me write it than argue any longer. Although the book isn’t out yet, it seems a lot of people are excited about it. I’ll particularly enjoy rubbing that in the nay-sayers’ faces later.

What tools did you use to write the book?

Most of the chapters started out as OmniOutliner outlines (although, towards the end I also did this on iThoughts HD on the iPad too). Once I had the structure done, I would export to OPML and import it into Scrivener where I did the heavy lifting.

I typed most of it but also used Dragon Dictate for Mac for big chunks. In hindsight, that is why much of the book sounds so informal. I was talking it.

Every chapter spent a lot of time in Scrivener before finally getting sent out to Microsoft Word where it got final formatting and shared with the editors. At first, it was rough going but by the end, I got pretty efficient.

What advice would you give to others interested in writing a book but can’t figure out how to find the time?

Never stop tilting at windmills. The book ended up 90,000 words. At no point did I have one of those weeklong sessions in a hotel room you always see in movies. I just chipped away at it waking up early and spending weekend afternoons at the computer. There really is no trick. Just find something you are passionate about or you’ll run out of gas.

What’s next for David Sparks?

I’m not sure what is next. I may do another book but it is too early to tell. I’m catching my breath from this one.

I am planning on going on a nerd binge at Macworld in a few weeks though. I’ll be giving talks at the User conference, a Mac Power Users episode on the show floor with Katie Floyd, at the Omni booth (about OmniFocus and OmniGraffle), the Smile booth (about all their products), and the Wiley booth about the book. If any Practically Efficient readers are in attendance, make sure to say “hello.”

Thanks for inviting me, Eddie. I’m a big fan.

Mac at Work is on sale at Amazon now.

Eddie’s note: By purchasing Mac at Work through the Amazon links in this post, you’re also supporting Practically Efficient at no additional charge to you.