I zip like crazy. Zipping files and folders is by far the quickest way to bundle things up and ship them by email, upload to websites, and much more. Why am I opening this post by telling you something stupidly obvious that you already know? Because God said that’s how you’re supposed to introduce geeky how-to posts; that’s why.

By default, if you compress more than one file or folder at a time on your Mac, OS X pops out a file called Archive.zip. You don’t get the chance to name it something else in advance. Maybe you’re cool with that, but there are times when this is somewhere south of desirable for me.1

My good friend, colleague, and fellow Mac power user, James Washer, recently sent me some ointment to stave off this little recurring blister in my in my workflow. He made a super simple little service using Automator that still has me muttering “why didn’t I think of that myself.”

It’s called Name and Zip, and you can download it here if you want. Just drop it in the Services folder in your Library. It’ll appear in your Finder service list any time you select files or folders.

But it puts a really useful front-end on the zipping process allowing you to not only specify a name but even save the zip file somewhere other than the folder you’re currently in.2 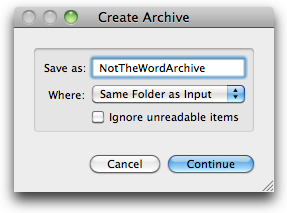 I also set up a keyboard shortcut to trigger it (Shift-Cmd-Z). You can do that, too, in System Preferences -> Keyboard -> Keyboard Shortcuts.

It’s just another lesson that friction fixes are often just a short time investment away, and they often come free of charge.