You may have thousands of actions stored in OmniFocus, but you can only work on one of them at a time.1 OmniFocus’s amazing database, user interface, and sync abilities are useless unless you can craft a workflow that allows the right actions to bubble to the top at any given moment of the day.

Mechanical things like start dates, due dates, and flags are useful tools, but they can’t tell you what to do on their own. Life is way too fluid for that.

Ultimately, you still have to tell you what to do. And ideally, each successive action you take on will lie at the intersection of the three fundamental dimensions of productivity: time, priority, and context. 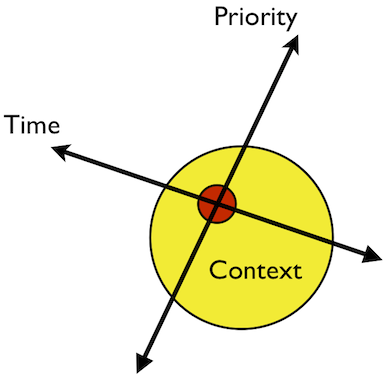 Time defines when a task is temporally available. Some tasks can’t start until a future time, and some tasks are due in the future.

Context is a spatial dimension, but not necessarily limited to physical spaces. Like time, context defines availability. There are many tasks that must be executed at a specific place on the planet. Contexts can also be mindsets and moods.

In my opinion, an OmniFocus power user is not someone who has 43 AppleScripts watching their every move. It’s someone who finds the optimal balance of time, priority, and context such that they only see a high-quality tapas plate of actions at a time.

I don’t claim to be a master of this, but I’ve found a method that works pretty well for me. If I’ve reviewed correctly, my “Today” perspective shows me a digestible batch of actions. 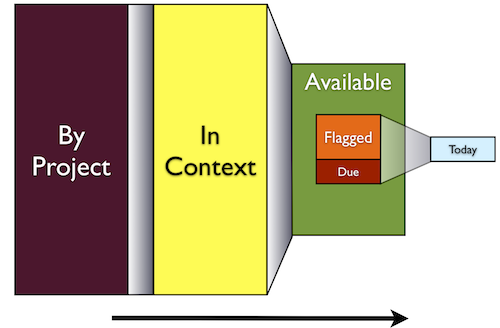 “Today” is a mix of things due today and available, flagged tasks. They’re organized by context. Ideally, my Today perspective shows five tasks or less at a time, but sometimes a few extras sneak in there. 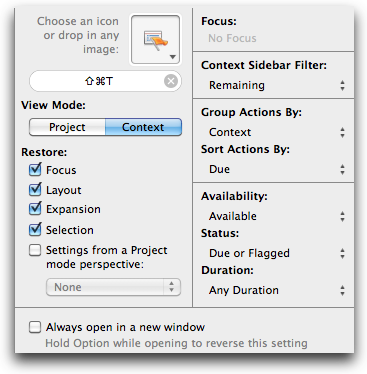 Conceptually, it’s really not that different than the dashboard I built with my previous system, Remember the Milk, but the validity and quality of the tasks that appear in my Today list are, in my opinion, better than ever thanks to a secret sauce that I've been applying liberally: review.

Review: the magical ether between dimensions

To date, no one has invented an inorganic substitute for reviews. Without reviews, there’s just no way I can consistently convince my working mind that the actions it sees right now are the ones it should be focusing on right now.

Reviews give my “Today” list credibility because they allow my planning mind ample time to do its thing so that it will step out of the way when it’s time for my working mind to do its thing.

How often should you review?

When I first started using OmniFocus, I thought a weekly review would suffice. I was wrong. Looking at OmniFocus’s built-in Review perspective once a week wasn’t cutting it. Too much life happens between Sundays.

I now review daily. I have a simple repeating project in which I review various perspectives and other things:

Daily reviews happen if they’re easy to execute. I don’t spend a ton of time doing them. For me, it feels most natural doing reviews at the very end of the day. A review isn’t very brain-intensive, and my brain isn’t good for much else at the end of the day anyway.

I also like the idea of setting tomorrow’s stage the night before so that I can immediately begin working the following morning with a clear mind.

By looking at my available actions every day, I stay in control. I keep an eye on everything that’s on deck, and I can easily flag things that I want to appear in my “Today” perspective the following day.

Once a week, on Sundays, I do a deeper review where I look at:

It’s all about Today

On the surface, my Today perspective looks simple. It’s just a handful of tasks among two or three contexts. But it represents the incredible power that a database like OmniFocus can provide when it intersects the equally important human element of review.

I really can’t overstate the importance of review, and I highly recommend creating custom reviews because they

Reviews also make it less likely that you’ll abuse your future self by setting meaningless due dates or stacking due dates on top of each other.

Being able to confidently shut down the part of my mind that worries about whether I’m working on the right thing is a pretty powerful thing.

The “Today” perspective may not be the right one for you and your workflows. But as I said in my previous post, I strongly recommend making simplicity your ultimate goal in OmniFocus. You may be a lot closer to that goal than you think. Just review.