Lately, my head’s been in the clouds. First, I created an Amazon S3 account so that I could use a nifty WordPress plugin called Updraft to back up PE to the cloud.1 Works great.

And then of course, my mind started wondering what other data I could convect up there.

Until recently, Dropbox was the only side of my backup workflow that touched the cloud. I love Dropbox for many, many reasons, but I’ve never seen it as the ideal place to park what I consider “static data.” To me, Dropbox is a place primarily for

This is an oversimplification of how I use Dropbox, but it’ll do.

Main point: Dropbox isn’t the place for large chunks of data like my Aperture 3 photo library, but my new Amazon S3 account seemed like the ideal cumulonimbus. Not only does S3 offer unlimited storage capacity, it’s dirt cheap:

Basically, you pay for what you use, and you’re not paying a lot -- as long as it stays fairly still.2 You’ll have to look at how much data you’ll be parking there and decide whether it’s cheaper than a tierd-price option like Mozy or a fixed-price option like Backblaze.3

(Data prices aren’t the whole story here, however, so be sure to look into the full feature set of any service you choose.)

Getting data into your S3 buckets isn’t hard. Just sign into the AWS console, and upload. If you have lots of data to upload, though, you’ll want to figure out how to sync so that, down the road, you don’t have to re-copy data that hasn’t changed.

A couple of options here:

Transmit is an FTP client that supports Amazon S3. It also happens to be my favorite FTP client. It’s beautifully designed and very reliable.

Not only can Transmit connect to my S3 account making it look and feel like an FTP server, it can mount S3 buckets as volumes so they appear right in the Finder.4

Best of all, I can use Transmit’s handy sync utility to mirror folders.

Jungle Disk offers several different service levels for businesses and individuals who want to back up to the cloud. It can also be used as an S3 client. I’m using their Desktop edition, which costs $3 per month.

I won’t discuss every thing that Jungle Disk can do, but for me, the most appealing justification for the extra $3 per month is its highly intelligent sync ability. After doing my initial upload, I decided to reorganize my S3 buckets and folders a bit. Jungle Disk flawlessly found my data on the very next sync and only uploaded new data.

You can also configure synced backup plans in advance with Jungle Disk, and while it might not win any design awards, the Activity Monitor is very useful for monitoring the progress of backups. 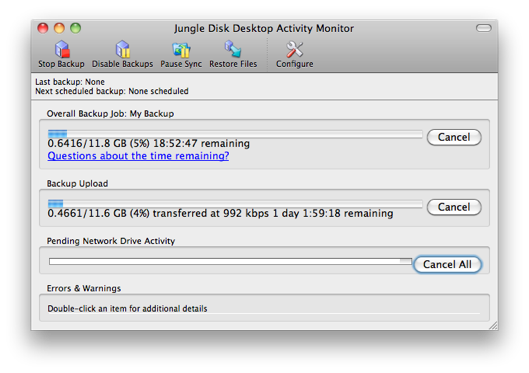 My backup workflow is a little better now

Right now, I’m not interested in putting every scrap of data I own in the cloud. I was already backing up all of my data to external hard drives.

But it’s really nice to know that my photos, in particular, are all but immune to loss now. I may outgrow S3’s variable pricing at some point, but it seems like just the right solution for now.

If you have a chunk of static, bulk data that, if you lost, you’d lose your mind as well, consider giving Amazon’s S3 service a try.