In the ostensibly ideal world of the DIYer, every next action would depend solely on him. That’s not how life on earth is parameterized, though, is it? Here, on this planet, sometimes we have to wait (on others).

The productive perils of waiting

If only waiting were just waiting. Life would be so much easier. But we all know waiting usually means coming unglued. When things can’t go forward until someone else acts,

Waiting (as efficiently as possible)

One of the most useful things I learned from Kourosh Dini’s book Creating Flow with OmniFocus was not how to act, but how to wait.

I have an OmniFocus context specifically for tasks where I’m waiting on something. It might be someone, some event, or for the completion of some other project. Normally I begin such tasks “Waiting for…” 1

The ‘Waiting’ context is the Saran wrap in my OmniFocus workflow. Whenever I put a project on the shelf because the ball’s not in my court, the next action’s context is ‘Waiting’.

Checking the waiting task off in a sequential project is like puncturing a preservative film and releasing all the fresh, active goodness back out.

Benefits of tracking the stuff you’re waiting on

I look at mine every day. Doesn’t take long, and it’s a super low stress way of keeping an eye on all the suspended animation in my goal progression.

My Waiting perspective shows me every available next action that has a ‘Waiting’ context. 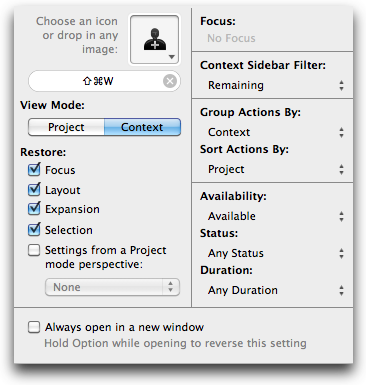 This happens to me all the time:

Next action: Call Steve to kick around ideas about iPad 3.

Next action: Waiting for Steve to call me back.

Next action: Call Steve again to kick around ideas about iPad 3.

If you can turn a cold shoulder to my sarcasm for a moment, you’ll get the picture. Phone tag is one of those real world hamster wheels that makes you want to punch your GTD system in the face some days.

When I feel a game of phone tag ramping up, I stop checking things off. Instead, I just reword the next action as needed. “Call Steve” becomes “Waiting for Steve to call.” And the context goes from ‘Phone’ to ‘Waiting’, respectively.

No fancy GTD dancin' here, okay? The point is keep focus on the precise status of the project so that it’s always blatantly obvious what should happen next – and what happens after that.