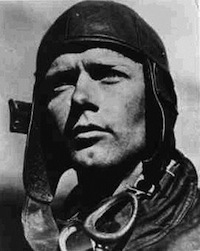 Life binds most of us (me included): We want to make something great, but we want a high chance of success before embarking. We want a clear, comfortable path.

Great work and comfort don’t usually go hand in hand, though. Greatness often lies behind a wall of impossibility. And so many would call finding greatness a game of chance.

Riskviews on the luck of Charles Lindbergh:

He was called Lucky Lindy because he succeeded at something that was judged to be highly unlikely. In fact, by analyzing prior experience you would give his solo trans Atlantic flight a ZERO likelihood.

So his flight was a freak occurrence. A Black Swan.

The one thing that most great people have in common is that they paved the way for a normal future by doing the impossibly scary first. They convinced themselves to move forward, while the world around them persistently chanted “it hasn’t been done; therefore it can’t be done.”

And then, when success did happen, everyone in the new normal conveniently forgot that they’re playing in a previously impossible future.

Your best chance at outmuscling the gravitational pull of the now-normal is to bet on the impossible—especially when you’re the sole contestant in a race you’ve defined. Probabilities are irrelevant once you decide to be unlike anyone before you.