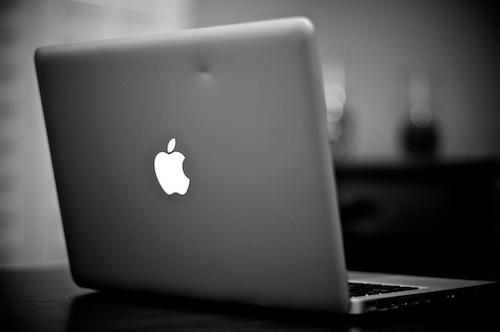 The little coffee stains near the track pad; the food crumbs among the keys; the dent in the aluminum lid. . . the signs of me.

All of the pictures I see of beautifully arranged desktops and computer setups have one thing in common. They’re all missing the most important ingredient in any workflow.

They don’t include people.

Walk around any art museum, and you’re likely to see beautiful paintings of the human body in its most minimal state, totally nude. At work, though, people wear clothes.

And they sit in front of computers.

Naked people and naked computers ultimately need each other as peripherals for life to matter much in the 21st century.

The human experience, so far, has been one of teasing art out of chaos. Workflows are a means to art. Creating art requires productivity, and productivity leaves a trail of unartistic excrement in its path.

Minimalism as a productivity aid

I believe minimalism should precede complexity.

I also think that many people can get more done by simplifying and taking a more minimal approach, especially in the face of external chaos.

I don’t, however, think productivity should be sacrificed for the sake of minimalism.

Start simple, and build around a core. Just as importantly, be ready to burn it all down when it stops working. Be doggedly adaptive, not stubbornly simple.

Look but do touch

I believe minimalist tools can be artistically beautiful. And I believe they can have practical benefits.

Funny thing, though: I’ve never met a building contractor that photographs hammers. Nor have I ever met a maid that scrapbooks vacuum cleaners. Or a dentist that ogles stills of floss.

Some of the most intangible, but important, “tools” in my workflows arise from art. For example, listening to music usually inspires me to do more and take the long way home. Elegantly designed software focuses my mind.

I think my most effective workflows—as judged by what they produce—are made up of an optimal mix of utilitarian and artistic elements.

You’re more than your tools

At the end of the work day, I think you should make sure you’re able to celebrate your own human abilities. To the degree that your tools extend your own abilities, celebrate them too.

Endnote: Yes, that’s my practically dent-free “sweet Mac setup” up there. It's still beautiful on the inside.