Suppose, in an effort to come across as smart, perceptive, and eloquent, you memorized as many famous speeches as you could. With a database of sage sound bites in your head, you could replace your normal contributions to conversations with phrases that have already been rewarded with adulation. Good idea, right?

Of course not. You’d come off as pretentious at best, a complete idiot at worst.

When it comes to sayings, phrases, and stories, context doesn’t just matter. It’s everything.

The same is true of technology. Just because something worked famously in a given implementation and market, there’s no guarantee it can be lifted and placed anywhere else with the same success.

Nevertheless, I have no doubt that we’ll see a steady diet of square technologies jammed into every round hole in our lives.

For example, the round hole in our face:

Coca-Cola Freestyle probably worked great in test labs. The touch interface is generally responsive, though not as responsive as an iOS device. But as long as all its chemical vials are full, it serves the chosen drink. 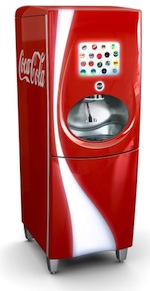 The problem is getting to that choice. Unlike in a typical tablet context, where the user is working more or less in isolation, Coca-Cola Freestyle imposes an extraordinary amount of decision on customers in an environment that’s extremely unfriendly to delays: busy counter-service restaurants.

Before Coca-Cola Freestyle arrived in the counter-service places I frequent, going from the cash register to the Diet Coke dispenser was a trivial task. Now, the old five-select soda machines are offline, dusty, and in the shadow of their brightly lit, 100+ option successor.

If you read about Coca-Cola Freestyle online and in newspapers, the tone is generally upbeat. I’d be surprised if any of those writers have actually used one (during peak business hours).

These are my real-world experiences with Coca-Cola Freestyle:

I can only hope that the reason the old soda machines are still in place is because restaurant owners aren’t fully sold on the idea of trading five choices for a hundred.