Deliveries, which I discovered through Bradley Chambers's review, is an app that makes shipment tracking way easier with almost no extra effort on your part.

My favorite feature is being able to forward a shipment notification email right into their June Cloud service, which grabs the tracking information right out of the email. It can even use the order number in the initial email Amazon sends after an order—making it totally uncessary to look at any other Amazon emails that follow.

The June Cloud service is smart enough to parse emails with multiple orders, too—or parse a single order involving multiple shipments. For example, the other day I bought some Balega socks from Amazon in several colors, which weren't all available to ship at the same time. Deliveries figured that out and split it into three entries, each with their own tracking status. 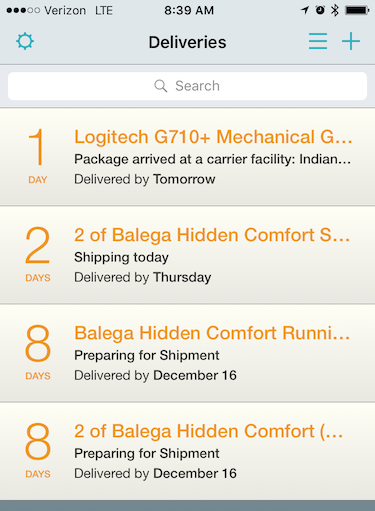 Deliveries solves real, if First World, problems. Now I have to rely far less on email shipping notifications, setting manual reminders, and worrying that I might totally lose track of something I ordered—especially during the holidays. One other nice benefit: getting a notification each time something is delivered to my door step—super useful if something shows up while I'm out of town.