I like writing dashes—both the en dash (–) and the em dash (—). But I don’t like the way OS X “smartly” converts certain patterns like -- to –. I would rather have direct control over these patterns for at least two reasons:

In other words, I don’t need OS X to be “smart” enough to make these symbols. I can instantly create them myself according to how they’ll be used.

Before OS X Mavericks, you could explicitly turn off smart dashes in System Preferences. Beginning with Mavericks, however, dashes and quotes were forced to share a common check box. 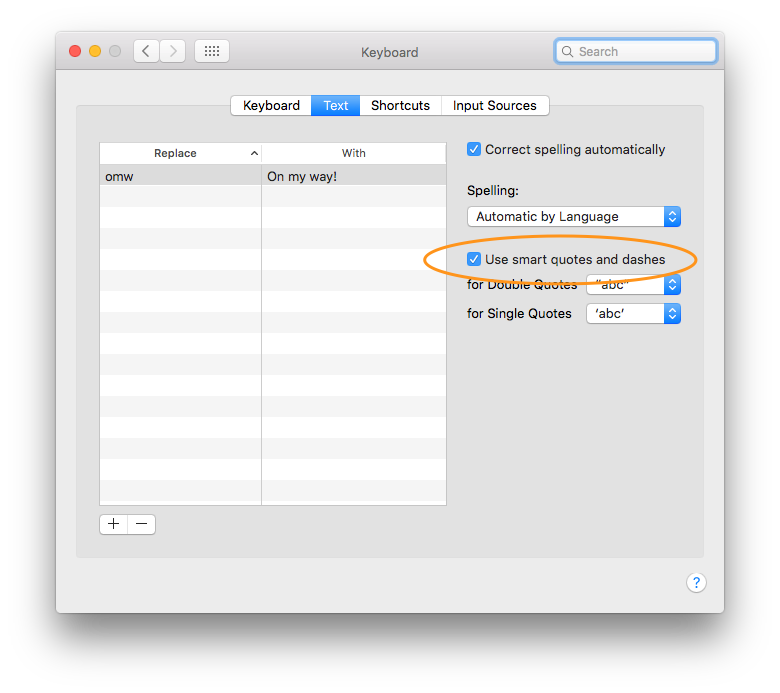 I don’t really mind curly quotes showing up in places because even if I’m writing something for a LaTeX file outside of a .tex environment (e.g. in an app like Ulysses), I will normally run everything through Pandoc to generate proper LaTeX code. Pandoc is pretty good with translating quotation marks of all kinds into proper LaTeX syntax:

It’s not so good, incidentally, with en dashes, which are more ambiguous in meaning—some people use them in place of a subtraction symbol, while others use them in contexts where em dashes are more appropriate.

All that to say, it’s unfortunate that you can’t separately turn on/off smart dashes and quotes in System Preferences. Fortunately, though, you still can through Terminal with:

This command turns off smart dashes, allowing you to preserve --, etc. in any document, but it allows smart quotes to continue functioning. Interestingly, System Preferences will show the smart dashes and smart quotes box unchecked after this change even though smart quotes still work.

For more on dash usage, see The Punctuation Guide.