Based on what I've read in emails, seen on Twitter, and absorbed in my soaking up of OmniFocus musings on the web, I've concluded that there are two primary walls one must knock down on their pilgrimage to OmniFocus:

The price of OmniFocus keeps many from simply trying it. For those that get over the cost hurdle, their knowledge of GTD concepts (or lack of) determines whether they stay.

OmniFocus is a premium productivity tool. And by most measures, it’s not cheap.

If you go all in with the desktop, iPhone, and iPad versions, you’re out $80 + $20 + $40, respectively and totally. That’s $140 for those of you getting out your calculators and enough to make even the most strung-out productivity junkie pause before taking a hit.

Like any tool with a monetary price tag, however, the decision to buy shouldn’t be made in absolute terms. The price should be justified (or not) based on the value you’ll receive for the dollars you surrender. It's also worth considering the cost of your current system.

Remember the Milk was the hub of my former system, and even it wasn’t free. To use RTM’s great mobile apps – something that I personally feel is absolutely necessary in my life – I had to maintain a “pro” account at $25 a year.

If I were to compare RTM to OmniFocus on the basis of cost alone, I would break even after about five and a half years of use1. So that’s one way to look at it.

A more logical, if probably a little abstract, view would be to assess the benefits brought to your life and workflows by OmniFocus that you didn’t get with your previous system, especially if your previous system had some attention holes that needed plugging.

For example, perhaps these cool-looking wooden pie charts show what OmniFocus could do for you: 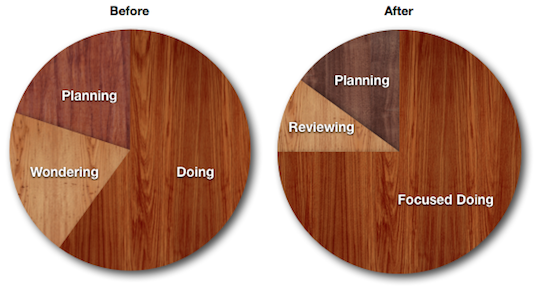 To the extent that OmniFocus can simplify and focus the state of your working mind, you’ll not only free up more time for actually doing things, you’ll probably focus on higher-value work. In other words, the Doing gets richer.

Even after implementing a system like OmniFocus, the Doing slice still isn’t at 100%. It never should be. You’d be crazy to jump into a row boat and just start madly rowing with no direction. Some part of your time budget must always be devoted to planning and reviewing.

So when evaluating the price tag of OmniFocus, it’s best to consider whether the extra time gained doing stuff is worth cost—and of course whether you actually are doing more with OmniFocus and not planning all day. It's also useful to know what your time is worth.

If you don’t have many projects or if you’re not a planner or if you work in an environment where someone else basically dictates your work every hour, then OmniFocus isn’t for you. A simpler, linear task system would probably suffice.

It’s difficult for me to imagine anyone getting immediate utility out of OmniFocus without having some background in GTD. For that, the best resource is still David Allen’s seminal book Getting Things Done.

I read David’s book in the summer of 2008, and I have been following his methodology in my business and personal life ever since. Since I learned GTD before using OmniFocus, it’s hard for me to imagine what it would be like to use OmniFocus without that foundation.

The ultimate goal of GTD is to reach a clear, focused state of mind when carrying out actions. The only way to achieve that level of clarity is to understand the purpose of things like contexts, review, and due dates. If you abuse or neglect any of those things, OmniFocus will probably create more stress than it will eliminate.

OmniFocus can only do so much. You'll get maximum value only when you interact with it in an optimal way. In other words, the code between your ears is still more important than the code running OmniFocus.

In summary (for now)

If you’re curious about OmniFocus, you need to decide if the return on the dollar investment is worth it (the cost barrier). And ideally, I recommend spending some time reading about and practicing GTD with a simpler, cheaper system first (the knowledge barrier).

Like any power tool, OmniFocus’s features are best appreciated if you come to OmniFocus with a real need for those features. It will probably fail in utility if you try to fit your workflow to the features. Don't buy bandaids so you can cut your arm.

This post is part an open-ended series on my experiences with OmniFocus. It's not the last. More to follow soon. You can find the original post and a whole stack of external resources here.